Sotheby’s New York is set to hold the first Aboriginal art auction outside Australia or Europe on Friday December 13 in the Big Apple when it offers modern and contemporary indigenous Australian art dating from the 1950s to the present day to art lovers.

Under his guidance Aboriginal art sales were then conducted in London from 2015 to 2018 – and, as a result, Sotheby’s has remained the market leader in this field for more than 20 years, establishing many new benchmarks and auction records along the way including the highest auction price for an Aboriginal art work ($2.4 million for Clifford Possum’s Warlugulong) and highest auction total (8.2 million) – both achieved on July 24, 2007 in Australia.

Klingender, who is now Sotheby’s senior consultant on Australian art, said he was delighted to introduce Australian indigenous art auctions to the United States, particularly since 2019 marked the 30th anniversary of the landmark travelling exhibition “Dreamings – The Art of Aboriginal Australia” at the Asia Society Galleries which first introduced New York to this dynamic art movement.

“Along with recent exhibitions of Aboriginal art in New York City at Gagosian and MoMA PS1, our inaugural auction marks a major reappraisal of the field as a growing contemporary art market,” he said.

Leading the auction is Gordon Bennett’s icon of post-colonial postmodernism, Self Portrait (But I Always Wanted to Be One of The Good Guys) from 1990 with a catalogue estimate $350,000-$450,000.

A culmination of a series that Bennett had been working on throughout 1990, the monumental work emphasizes a strong contemporary practice and illustrates Bennett’s self-declared mission to upturn the colonialist assumptions of Australian national culture.

The work depicts Bennett as a five-year-old child dressed in cowboy garb ready to draw a toy gun. Eyes-shut, he conjures frontier scenes appropriated from educational Australian social studies books of the late 1950’s, which Bennett renders in two thought-bubbles that take the shape of gridded perspective diagrams that also form a crucifix.

To the boy’s left, inside the sharp jagged diagonals of the abutting canvas, erupt the collective fears of a primitivist subliminal colonial imaginary.

This iconic and important painting has been exhibited in major museums in the United Kingdom, Europe, Asia and Australia, and has been illustrated and discussed in dozens of contemporary art publications since its creation.

Two early masterworks by Emily Kame Kngwarreye, the most internationally acclaimed female Aboriginal artist whose professional career began at the age of 80, are also featured in the sale. Both on offer from the renowned European Collection of Thomas Vroom, the rare, large-scale works are not only classic examples of Kngwarreye’s abstract dot paintings but reflective of her experimentation with an extended colour palette.

Created in November 1990, towards the end of the first year of her public career as a painter, Untitled (estimate $250,000-$350,000) moves away from the traditional palette of red, yellow ochre, black and white, introducing greys, purples and browns to create subtle shifts in intensity and emphasize the visual depth of the painting.

With its yellow, purple and pink palette, Summer Celebration (estimate $300,000-$400,000) demonstrates Kngwarreye’s broadening use of colour as she moved away from strictly using natural earth tones.

One of a series of large canvases painted in the heat of the Australian summer at the very end of 1991, Summer Celebration is among the first which Kngwarreye painted on such a vast scale,

emphasizing the broad expanse of her country, and celebrating the seasonal cycle of the ever-flourishing landscape.

A standout lot from the Collection of Fiona Brockhoff is The Seagull (estimate $50,000-$80,000) by Mawalan Marika, a renowned artist as well as a highly influential ceremonial leader and political activist who was leader of the Rirratjingu clan when the first missionaries arrived in 1936.

After 57 years, this rare and exceptional bark painting is returning to New York, where it was last exhibited in 1963 at the Qantas Galleries as part of the acclaimed exhibition ‘Australian Aboriginal Art’.

A depiction of the Seagull Mourning Ceremony, the top half of the painting illustrates the Ngurula flying across the country as it travels from one clan’s land to another, linking the communities together. The bottom half of the work shows the mortuary ritual of using a carved seagull’s head with a body and wings made from feathers and string as a ceremonial object to announce a death.

Another highlight on offer in the sale is Tingari Ceremonies at The Site of Pintjun (estimate $120,000-$180,000) by one of Australia’s most prominent abstract painters, Ronnie Tjampitjinpa.

Hailing from the Collection of Gabrielle Pizzi, the present lot was recently featured on the cover of the catalogue for curator Kaspar König’s exhibition, ‘Remembering Forward – Australian Aboriginal Painting Since 1960,’ mounted by the Museum Ludwig in Cologne.

A classic example of his style, Tingari Ceremonies at The Site of Pintjun features repetitive, geometric shapes and bold lines in the traditional four basic colors of black, red, yellow and white, representing the activities of the Tingari ancestors, and evoking the sacred powers of these supernatural creators, who established Pintupi law and ritual – a common theme throughout Tjampitjinpa’s oeuvre. 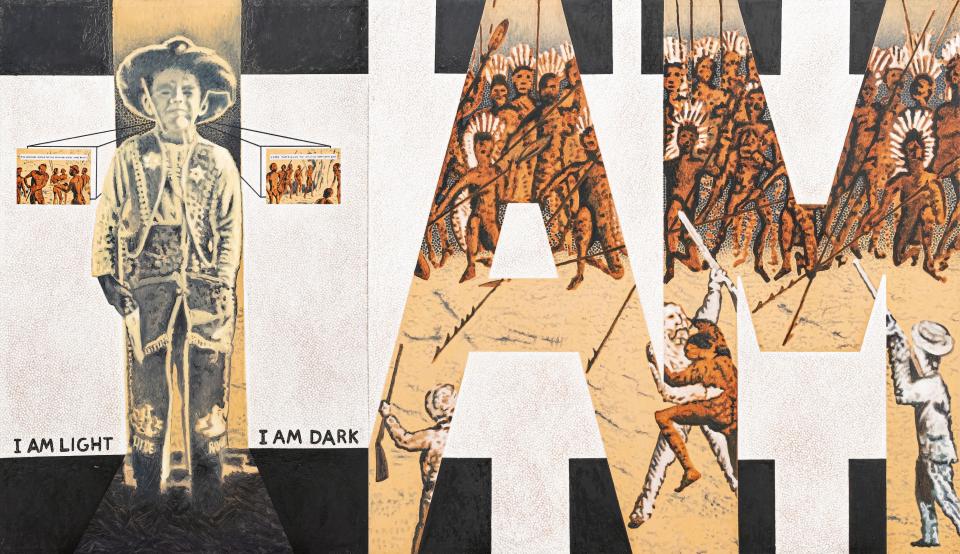 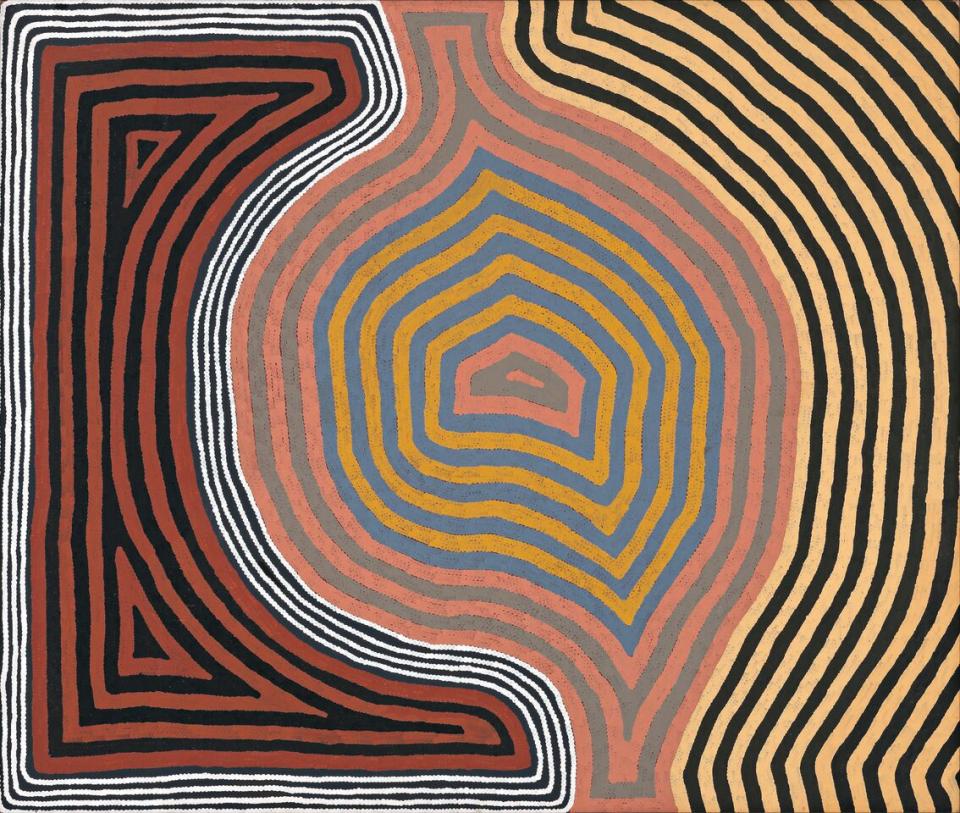