Perhaps some art lovers might have been a little disappointed that a new milestone was not achieved – but at the end of the day Russell Drysdale’s Going to the Pictures, 1941 (lot 12) $2.4 million hammer price did equal the artist’s previous record for one of his works, set in 2017 for Grandma’s Sunday Walk, when Deutscher and Hackett finished its Melbourne sale and final auction for the year on Wednesday November 11.

With all bidding still over the phone and internet because of Victoria’s gradually easing coronavirus restrictions, 88 per cent of paintings were sold in the aptly named Twenty Classics of Australian Art, which was followed by 43 works in the Important Australian and International Fine Art section.

Postmodernist Rosalie Gascoigne never fails to deliver at auction and her work Ledger, 1992 (lot 5) sold for a solid mid-range estimate of $220,000, while the large Fred Williams work Hillside at Lysterfield II, 1967 (lot 8) was well contested for $1.8 million – not far off the $2.3 million artist record the auction house set in July.

Contemporary art is well and truly gaining traction in the secondary market when works like Michael Cook’s suite of 14 inkjet prints collectively titled Civilised, 2012 (lot 30) set artist records – in this case $88,000 on a $65,000-$85,000 estimate. 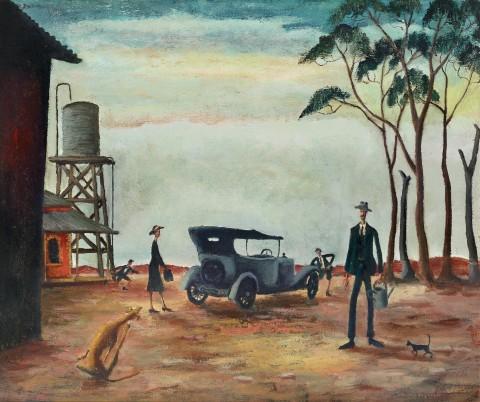